Queensland’s current Training Ombudsman, Geoff Favell, has had over 30 years’ experience in the Queensland public sector with senior roles across employment, industrial relations and training portfolios in metropolitan and regional centres. As Interim Training Ombudsman, Geoff will provide a recognisable and accessible avenue for complaints and consumer advocacy for VET stakeholders to progress disputes and seek advice and assistance relating to the overall conduct of the VET sector in Queensland.

Paul has worked in various management roles in not for profit and government agencies with over 20 years of experience in skilling and workforce development dealing with government contracts, corporate business policy and the development and implementation of training processes.

Paul joined the MTA Institute (RTO no. 31529) as General Manager in 2011 and is responsible for its management and operations. MTAI is the largest private automotive Registered Training Organisation in Queensland and provides training predominantly focussing on apprenticeships. Prior to this position, Paul worked as the Executive Officer at Automotive Skills Queensland, which provided advice to Government regarding training initiatives for current, medium and long term issues affecting the automotive industry. The role of the Executive Officer was vital to driving change in the Vocational Education & Training (VET) sector by working closely with industry, key stakeholders and Government to achieve solutions for the automotive industry skills’ shortage and sustainability.

Paul has also worked on the Queensland ITECA State Committee for the 5 years achieving positive results for the VET industry through policy feedback to the government of the day and RTO industry guidance.

Craig has worked in Vocational Education for 25 years; joining the sector after an engineering career in the Australian Army that included his completion of an apprenticeship as a fitter & turner.

Craig is a former Non-Executive Director and current Executive Officer of the Apprentice Employment Network Qld & NT (AEN).  AEN represents Group Training Organisations; the largest network of apprentice and trainee employers in Queensland, as well as operating the Queensland Out-of-Trade Register program supporting at risk and cancelled apprentices back to employment & training.  He is also the Director and Principal Consultant of Perform for Purpose Pty Ltd, a strategic level consultancy supporting the Non-Profit sector.

In addition to his trade qualifications, Craig holds a Graduate Diploma of Management (Learning), Advanced Diploma of Business (Management) and Certificate IV in Workplace Training & Assessment.

As the Chief Executive Officer, Mary is responsible for the strategic direction and overall operation of TAFE Queensland as the largest and most experienced provider of vocational education and training across Queensland, delivering practical, industry-relevant training to more than 120,000 students each year.

Mary has spent more than 30 years working in the VET sector and is passionate about all aspects of the business, but most importantly about creating real outcomes for students and their employers. Mary has held a number of senior leadership positions within the VET sector and brings a wealth of knowledge to this important role.

As a member of or contributor to a number of government, industry and community forums and committees, Mary is a well-recognised leader in the VET sector, not only here in Queensland, but also at a national and international level.

Mary has a Bachelor of Arts Degree, Diploma of Teaching (TAFE), Graduate Diploma in Open and Distance Learning, and a Master’s Degree in Education and Learning Innovations.

Eric Davis has over thirty-four years experience in the VET sector, twenty-five as a teacher and nine years as the Queensland State Manager for Worldskills Australia. Eric holds several qualifications including a Diploma of Teaching, Bachelor of Education and a Post Graduate Diploma of Occupational Health and Safety.

Since 2003 Eric has also been a regular volunteer for Worldskills Australia, undertaking a number of roles including National Chief Judge, National Project Designer and International Expert for the skill category of Bricklaying.

Eric has demonstrated a long term commitment to the VET sector and is passionate about promoting career pathways to young Australians.

Leonie Carlile, Group CEO The BUSY Group, has been with The BUSY Group since 2017, initially as General Manager Corporate Services, then COO and was appointed into the Group CEO role in 2022.

For the past 20 years, Leonie has held roles in Executive and Senior management with experience in both Human Resources and broader Business Management. Commencing her career as an Officer in the Australian Army, Leonie has worked across a range of sectors, including Manufacturing, Government, Resources and for the last decade in For Purpose, Not-For-Profit organisations.

Leonie specialises in Leadership, Strategic and Business Planning with specialist knowledge in HR and Finance. She holds a BA (Economics & Politics), MBA (Human Resources) and Post Graduate qualifications in Accounting.

Simone is the State Coordinator for the Queensland Training Awards and she previously worked as a Corporate Events Manager for TAFE Queensland Brisbane, Southbank. Simone joined the Queensland Overseas Foundation Board of Governors in 2016 and she brings a wealth of experience in managing a state-wide, vocational sector award programme to the QOF Board.

Ed Given started his career in 1975 as an apprentice carpenter in the construction industry working mainly in the housing industry. After 25 years as a builder ,project manager and building estimator Ed followed his interest in training young people through apprenticeships and pursued a career in the Group Training Industry. Spending 22 years in Group Training allowed Ed to assist in the development of hundreds of young men and women into fine tradesmen and women many of who have become leaders in their industries. Ed is proud to be involved in the Qld Overseas Foundation assisting young tradesmen and women to travel overseas to expand their skills and to bring their skills back to Australia.

Steve Wyborn is the Chief Executive Officer of IntoJobs, an organisation delivering Workforce Australia Services across Australia. Steve has held operational and senior leadership roles in the Queensland VET sector since 1995. His early VET experience started within a GTO and RTO where he delivered pre-employment training to disengaged youth in Cairns to commence careers in the Hospitality and Tourism Sectors. Since that time Steve has been a strong and vocal advocate for the role of VET in creating sustainable career opportunities for young people, particularly those most at risk. 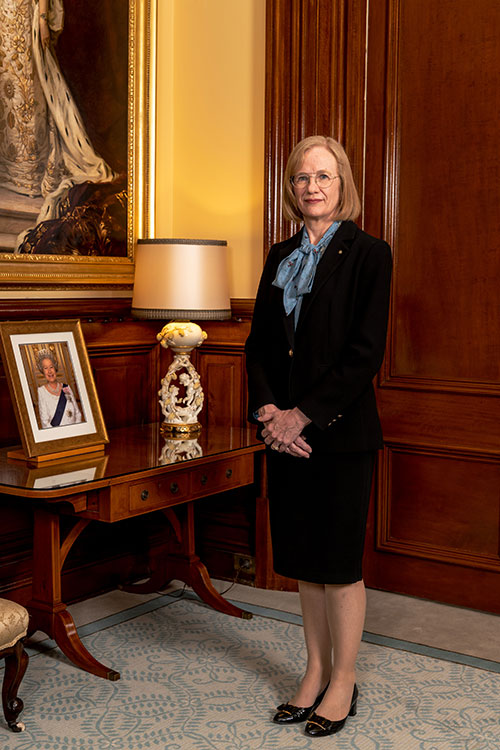 Dr Jeannette Young and her husband, Professor Graeme Nimmo are proud to serve all Queenslanders.

The Governor was born in Sydney in 1963, eldest daughter of Dr David Young and Mrs Lilly Young. After graduating from Medicine at Sydney University in 1986, she commenced her medical career at Westmead Hospital. During that time, she married, had a daughter, Rebecca, and transitioned to Medical Management, completing a Master of Business Administration at Macquarie University.

After her marriage ended, the Governor – with Rebecca – moved to Queensland in 1994 to become Director of Medical Services at the Rockhampton Hospital. In 1999, she relocated to Brisbane to take up the role of Executive Director of Medical Services at the Princess Alexandra Hospital, and served on various workforce committees, including as Chair of AMWAC (Australian Medical Workforce Advisory Committee).

During this time, the Governor met her second husband, Professor Graeme Nimmo. In March 2000, they were married, and in June 2001 welcomed a daughter, Jane.

In August 2005, the Governor was appointed to the role of Chief Health Officer for Queensland, with responsibility for leading the State’s preventative health and public health agendas, including response to public health emergencies. In January 2020, when the COVID-19 virus outbreak was declared a pandemic, the Governor became the State Health Incident Controller.

During her medical career, Dr Young had specialist qualifications as a Fellow of the Royal Australasian College of Medical Administrators and as a Fellow by Distinction of the Faculty of Public Health of the Royal College of Physicians of the United Kingdom. She was also appointed Fellow of numerous other eminent education and research institutions, has received honorary doctorates from two Queensland Universities, and has received an Australia Day Achievement Medallion, as well as a Public Service Medal.

Her Excellency was sworn-in as the 27th Governor of Queensland on 1 November 2021.

* Governors of original QOF Board